It’s been a sobering few days for me. This week, the third Colorado Law Enforcement Officer in 37 days was shot and killed. This one hit close to home as he not only worked close to where I live, but I recently found out that he attended the church my kids and I recently started attending. Details continue to emerge, but in a nutshell, four officers were shot while trying to effect an arrest. One Sheriff’s Deputy, is dead.

Having spent a little over 12 years in Law Enforcement myself, currently doing private security and executive protection work, you can likely understand how it affects me anytime I hear the phrase “Officer Down.” It’s like losing a family member. We (State, Local, Sheriffs, Private Security) often fight and poke fun among ourselves. Just like family. But at times like this, we’re all the same. There’s no difference between jurisdictions or uniforms. We’re all brothers and sisters in Blue. We are family.

As we discuss the events surrounding these incidents, one question always comes up, “is the suspect, dirt bag, low life POS dead?” If not, we’ll probably joke about how he’ll soon wish he was. If he is, we’ll high five each other and say something to the effect of “good! Serves him right.” Or “he got what he deserved.” Safe to say, whatever is said, it’s not usually nice. This time around was no exception.

As I reflect on my own carrier in Law Enforcement, I remember three times when officers I knew personally were killed in the line of duty. One of whom I even helped field train. In those incidents, one was shot, one was hit by a drunk driver and one was hit by a distracted driver. All three killed. All three brothers in blue. All three taken too soon. Each time, the commentary was the same. Mourning for our fallen brother, nothing but hate and disdain for the suspect.

It’s the human side of us that wants an eye for an eye. When somebody hurts our family, we naturally want to retaliate. Right or wrong, it’s what comes natural to us. I freely admit, that’s my current state of mind. Pissed off that yet another brother has made the ultimate sacrifice. Enraged at the lack of value on human lives. Especially those who put their lives on the line everyday to protect us. I admit, I’m glad the suspect who killed the Deputy this week was also killed. And I’m glad it was our brothers who killed him. Yes, I believe he deserved it. And yes, now, I’m blinded by my anger.

As I was preparing to leave work, I received text messages from my kids. Each blaming the other for something that was or wasn’t done to each other. Already moody over current events, I decided not to respond, and to take my time going home. It was on the ride home that I heard God speak. That quiet little voice of His that’s louder than a bullhorn, convicting me of my attitude.

He reminded me that we are all His children. “Not wanting anyone to perish, but everyone to come to repentance.” 2 Peter 3:9b NIV. All this time I’ve been glad that the Deputy killed this week was a believer and likely sitting with God at this very moment. While at the same time, the assumption is that the dirt bag who killed him probably was not a believer and is now burning in hell. Which, he deserves, right?

One of the prayers I’ve been praying recently is for God to give me His heart. To allow me to see others through His eyes. And for a moment, I found myself wondering if Gods heart was broken over the one lost. Not the Deputy, because as a believer, he has achieved his reward. But the suspect who killed him? What has become of him? What does that do to God? Does he grieve for the soul that we assume is lost forever? I don’t imagine He was rejoicing the way I was today.

I found myself conflicted with my feelings. If we are truly seeking to be like Jesus, then shouldn’t we be just as grieved over the loss of the suspect as we are with the loss of the Deputy? I mean, when it comes down to it, haven’t we all “sinned and fallen short of the glory of God?” Romans 3:23 NIV. Don’t we all “deserve” to die and be eternally separated from God? Didn’t Jesus pay the ultimate price so that we wouldn’t have to? And doesn’t the suspect fall under that collective “we” as well?

As I prepare to close out the evening and get ready for bed, I find I’m still angry. Maybe more, now that I’m thinking this way. It’s almost like I’m betraying the brotherhood. Believing that the suspect even had a soul to consider, or hinting at the fact that God could possibly care about such a retched excuse for a human being. The human emotion is winning, and honestly, I’m not interested in the conviction that’s been laid on my heart. I want to be angry. I want to hate the man that killed my brother. I don’t want, to forgive. 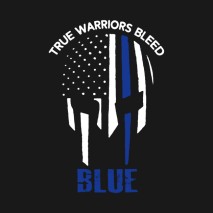 What I can say is God is still in control. And “we know that in all things God works for the good of those who love him, who have been called according to His purpose.” Romans 8:28 NIV. This Deputy belonged to another family. The family of God. Which means there is hope beyond the grave. And while I still struggle in the aftermath of this incident, I know that my brother is walking with the Lord. Maybe, as time goes on, I’ll be able to see the suspect through God’s heart and eyes, and also grieve for his soul.

So many things are running through my mind. It’s almost too many to put into words. We live in a world that doesn’t play by the rules. We live in our own daily routines with blinders on to the things happening around us. I look back at my own career and think about all the times I left home to go on duty. I kissed my wife and kid’s goodbye, not knowing if I would see them again. I’m guessing the Deputy who died this week did the same. But if he was like me, he too was in a routine. He always came home. He didn’t really think about whether or not he would see his family again. Then, one day, that routine was broken. He didn’t come home. Truth be told, the suspect too, probably left home thinking he’d be back. “Just like always.”

Life isn’t fair. Our routines can be broken in a moment. Leaving us with one (or more) less family members. I challenge you to break your routine now. On your terms. Take in each moment with your family and friends. If you love someone, let them know. If you’re at odds with someone, take the first step to fix it. Don’t let a tragic incident give cause for regret. And when you see a Police Officer, State Trooper, Sheriffs Deputy or even a Security Officer, tell them “Thank You.”

“The only thing necessary for the triumph of evil is for good men to do nothing.” – Edmund Burke.

“We sleep safe in our beds because rough men stand ready in the night to visit violence on those who would do us harm.” George Orwell.

“…And maybe just remind the few, if ill of us they speak. That we are all that stands between the monsters and the weak.” – Michael Sparks. 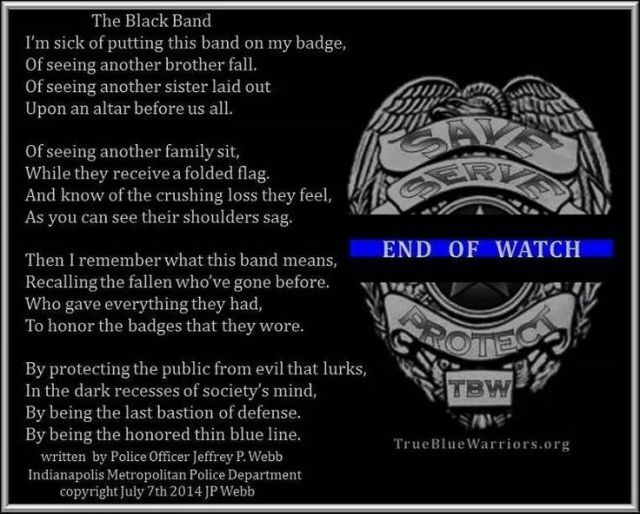 “For I know the plans I have for you,” declares the Lord, “plans to prosper you and not to harm you, plans to give you hope and a future.”